The Gold Standard of Christian Giving

Part XI of our series on Doing Good 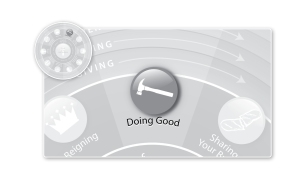 People ask me, “So what’s the deep theological reason for doing one offering a month in the .W Church? And should Christians tithe?”

My own solution to these dilemmas is that if something is specified in the Nicene Creed, it is a core belief which all Christians must hold, without exception. We lay no precondition of belief on members other than the Nicene Creed, which, in the words of Vincent of Lerins in 450 AD, specifies “…that which has been believed everywhere, always, and by all.”

So as regards when and how much and how often to give, you’ll notice that these things are not specified in the Nicene Creed. The Scripture gives us ample guidance in these matters, of course, and one recurring theme—which is especially important to note as we conclude this month’s emphasis, on the Work of Mercy of Doing Good—is that our giving should be planned and purposeful.

Some Christians who hate tithing say, “God wants us to give spontaneously and not in a way where we are bound to a set amount that drives the Spirit out of the process.”

But the Scripture does not commend spontaneous giving as the gold standard of Christian giving.  Instead, in 2 Corinthians 9:7, Paul says,

“Each one must give as he has decided [or the King James says “purposed”] in his heart, not reluctantly or under compulsion, for God loves a cheerful giver.”

The gold standard of Christian giving is not spontaneity but purpose.

If you read the verses around this one in 2 Corinthians, Paul is stressing to each Corinthian Christian the importance of praying and thinking through what they will give to a special offering Paul is raising to send to the mother church in Jerusalem, which is experiencing hardship due to famine and persecution. Paul is saying, “Think about this ahead of time. Pray about it ahead of time.” He uses the analogy of sowing and reaping. Anyone who has planted so much as a single zucchini will know that sowing a seed requires planning, preparation, and ongoing cultivation.

And some “modern” Christians believe that God wants them to give according to what we call “random acts of kindness,” which means that they give whenever they sense the Holy Spirit is prompting them to give.

But none of these practices get at what Paul is talking about here.

God plans his giving very carefully! He gives us what will help us, not whatever we ask for.

How have you navigated this question in the past?  What is your personal practice when it comes to giving?

The Reverend Dr. Eric Foley is CEO and Co-Founder, with his wife Dr. Hyun Sook Foley, of Voice of the Martyrs Korea, supporting the work of persecuted Christians in North Korea and around the world and spreading their discipleship practices worldwide. He is the former International Ambassador for the International Christian Association, the global fellowship of Voice of the Martyrs sister ministries. Pastor Foley is a much sought after speaker, analyst, and project consultant on the North Korean underground church, North Korean defectors, and underground church discipleship. He and Dr. Foley oversee a far-flung staff across Asia that is working to help North Koreans and Christians everywhere grow to fullness in Christ. He earned the Doctor of Management at Case Western Reserve University's Weatherhead School of Management in Cleveland, Ohio.
View all posts by Pastor Foley →
This entry was posted in Uncategorized and tagged Christianity, Church, Doing Good, Generosity, Giving, Tithing, Whole Life Offering. Bookmark the permalink.

1 Response to The Gold Standard of Christian Giving