The Story of Disgraced Christians Who Denied Christ 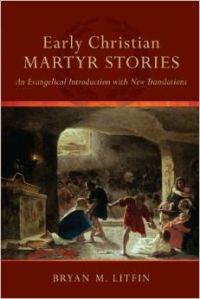 Post by Pastor Tim – As I prepare to go to France (FYI – just a layover, no romantic Paris vacation for me), I was fascinated by the persecution that overtook the Christian communities in Lyons and Vienne in 177 AD.  It’s believed that Christianity came to this area through the evangelism of the churches in Asia.  Bryan Liftin, in his book Early Christian Martyr Stories said,

Faith in Jesus made the leap from the lands Paul and John had evangelized to a brand-new regions: a land of pagan Celtic tribes that had finally bowed the knee to the Roman Empire (pg. 71).

But we see that not only did a simple faith in Jesus make the leap from Asia, but also discipleship – Christians who were training for the heavenly contest – disciples who were fully prepared to give their lives for Jesus Christ.

Yet there were some, who in the words of Eusebius were “untrained and feeble” and who ended up shamefully denying Christ (Early Christian Martyrs Stories, pg. 72).

I half-expected that this would be the end of the story concerning the “untrained and feeble,” and that Eusebius would only focus on the heroic and victorious martyrs.  And while most of the account of the persecutions at Lyons and Vienne did focus on those martyrs who were trained and faithful, he devoted a few paragraphs to those who denied the Lord.

He starts off by noting how terrible it was for those who denied Christ.  He said that they were “dejected, ugly and full of disgrace.  Moreover, they were ridiculed by the pagans as despicable cowards (pg79).”  But what amazed me was not the shame that these people endured, but what happened next.

The deniers had been sent back to prison, but in God’s amazing plan they had not simply returned to rot in prison awaiting death.  Rather, God sent the faithful ones to intermingle with them in prison and restore them.

For through the martyrs, most of the deniers were reconceived and reimpregnated in the womb and restored to new life, learning at last how to confess.  Alive now and fortified, they came before the judgment seat so the governor could question them again.  And God, who does not desire the death of the sinner but shows favor to the repentant, made this moment sweet. (pg. 81)

Some of the Christians failed and denied the Lord.  They were perhaps dejected and full of disgrace because they knew the words of Jesus when he said, “Whoever denies me before men, I will also deny before my Father who is in heaven (Matthew 10:33).”

And yet, God didn’t allow their story to end at that point.  Some of them were ready to die for the Lord and others were not.  But even the ones who denied Christ were still shown incredible grace and mercy from the Lord.

Pastor Foley has pointed out that martyrdom is repetition of the story of Christ’s suffering and death. But in the case of these French Christians, we not only see faithful Christians re-enacting the suffering and death of Christ, but also re-enacting the forgiveness and restoration of Peter as seen in John 21.  These Christians, who were nearing the point of death themselves, were still training failed Christians for martyrdom and assuring them of Christ’s forgiveness that was still available to them in their time of need.

Pastor Timothy Dillmuth is the Discipleship Pastor of Voice of the Martyrs Korea. He oversees Underground University, a missionary training school for North Korean defectors, and does discipleship training with Christians from all over the world. Pastor Tim received a bachelor's degree from Zion Bible College and an M.Div. from Regent University. He lives with his wife, Melissia and their three children in Seoul, South Korea.
View all posts by tdillmuth →
This entry was posted in persecution and tagged Early Christian Martyr Stories, Eusebius, french persecution, martyrdom. Bookmark the permalink.

1 Response to The Story of Disgraced Christians Who Denied Christ