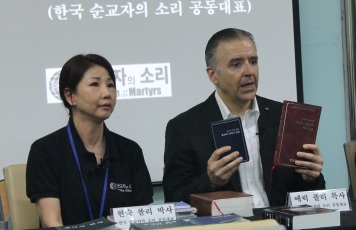 Voice of the Martyrs Korea announces the publication of the first ever North Korean/English Parallel Study Bible, produced in partnership with Wycliffe MissionAssist (UK), SDOK (Netherlands), and Voice of the Martyrs US. This Parallel Study Bible consists of Genesis and the New Testamentand contains study notes, introductions to each book of the Bible, and a list of vocabulary words and definitions for each chapter, all in both English and the North Korean dialect. The purpose of these study aids, which are translated from the Wycliffe Easy English Bible, is twofold: (1) to increase the comprehension of North Koreans who read the Bible, and (2) to facilitate English language learning in an evangelistic context for North Koreans. A second new Bible, called the North Korean Study Bible, is a smaller version that contains only the North Korean dialect text and study helps.

Analysts say that even North Korean leader Kim Jong Un now requires his top aides to learn English. This indicates that English language study will be in increasing demand among affluent North Koreans in the future. Voice of the Martyrs Korea has observed a steadily increasing interest among North Koreans and North Korean defectors in English language learning resources. These Bibles will open doors to which we have few other keys, making them a great evangelistic tool among young North Korean defectors as well as affluent and high level citizens in North Korea itself. We also believe these parallel NK/EE Bibles will be of significant interest to NK refugees in China and Thailand, who are seeking to go to the US.

It is a well-known fact that it is illegal to own a Bible in North Korea. If a North Korean is caught with a Bible, he or she is severely punished. Not only is the punishment directed towards the person with the Bible, but towards three generations of his or her family. Because of this, most North Koreans coming out of NK to seek freedom in South Korea through China, Thailand and other countries have never even seen, or read, a Bible.

Because NKs have never been granted access to the word of God (unless it was passed down to them by family members who were Christians) and punished if caught with it, for most defectors the Bible is completely new to them and they struggle to understand the meaning of even simple concepts and words such as “amen,” “hallelujah,” “Jerusalem,” and “repent.” We did this project now because we saw the great need for very simple, doctrinally sound, understandable explanations of the scripture to be given both to defectors who are new to Christianity and to those who are still inside NK or living in foreign countries as workers or refugees. We are confident that the NK/English parallel Bible will be an especially good evangelistic tool as NKs read and use it for English language learning, thus opening up new doors of ministry for us that were otherwise closed.

The Bibles will not be sold but instead given to churches and partner organizations who demonstrate an effective plan for their use.

During our years of North Korea ministry we have experienced a significant need for the kind of Bible study aids that will be included in the NK study Bible, and we are thankful for the partnership of Wycliffe Mission Assist, SDOK, and Voice of the Martyrs US that has enabled us to translate these study aids into Korean for inclusion in the NK/ENG Parallel Study Bible and the NK Study Bible.

Dr. Hur, Ju served as theological consultant for the project. As theological consultant he ensured that the basic meaning of the study aids was faithfully reproduced in the North Korean versions. A team of seminary students, VOMK staff, and North Korean defector students at VOMK’s two discipleship training schools for North Korean defectors (Underground University and Underground Technology), served as proofreaders, editors, and the creative team on this ground breaking project.

“So in preparing our two new Bibles for publication–one, a North Korean Study Bible and the other, a North Korean/English Parallel Study Bible–we experienced again the same great challenge we experience each time we publish a North Korean Bible: How to help North Koreans add to their understanding of the Bible, in a way that adds only what is necessary to the text to help them grasp the full riches of the Word of God.

The Rev. Dr. Eric Foley, CEO of VOM Korea, wrote the following to North Korean readers in his introduction to each of the new Bibles:.

Greetings to the Reader.  This book is the most widely read book in history. It has been read by people in every country of the world. It is loved by billions of people because it tells the good news about the one true God, who is a good and loving and all powerful God who rules over the whole universe.

This news did not originate in Korea or America or in any country on earth, though it has been announced in every country and is being sent to all people. As you will read in the beginning of this book, God created the heavens and the earth. He remains active in every country on earth to this day, including North Korea. He creates each one of us in love, including you. Because of his love, he is even now setting right every wrong that has been committed by every human being, including us.

As you will also read in the book, he has accomplished this by being born on earth as a man even while he continued to rule from heaven. This man, Jesus Christ, showed us the way to God and how we should live our lives. He was rejected by those to whom he came, and they killed him. But he was raised from the dead, forgave those who turned against him, and ascended into heaven. He will soon return to end history. He will rescue those who trust him but also punish those who have rejected his forgiveness. Until his return, his spirit is present with us on earth, willing to live inside all of us who will receive him in order to guide us back to God.

This book will tell you the good news of how to invite the one true God to live inside you so that you may be made ready for his soon return. Just as Jesus Christ died and was raised again, those in whom God’s spirit lives will also be raised from the dead and given power to overcome evil. Please read this book to learn how.

The proof of God’s love is that he has used all of the circumstances of your life to bring you to the point where you now hold this good news in your own hands, in your own language. We encourage you not to set aside this book. The purpose and destiny of your life, as well as the meaning of everything you have so far experienced, is contained within.

Pastor Timothy Dillmuth is the Discipleship Pastor of Voice of the Martyrs Korea. He oversees Underground University, a missionary training school for North Korean defectors, and does discipleship training with Christians from all over the world. Pastor Tim received a bachelor's degree from Zion Bible College and an M.Div. from Regent University. He lives with his wife, Melissia and their three children in Seoul, South Korea.
View all posts by tdillmuth →
This entry was posted in Announcements, Bible, North Korea, Videos and tagged North Korea, North Korea Bibles, Rev. Eric Foley. Bookmark the permalink.