Presence: You Can’t Be A Ransom If You Don’t Show Up In The Form Of The Captive 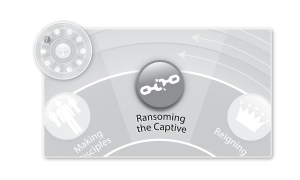 Building on our preceding post we’re now laying out a four step Scriptural process for ransoming the captive. And there’s no way around it: Being a ransom–rather than paying a ransom–means showing up in person to our captive captors. (Remember, we’re ransoming the one who is most captive, namely, the captor himself.)

This is of course after the manner of Christ, who, as the Apostle Paul explains, appeared in person in “the fullness of time”:

4 But when the fullness of time had come, God sent forth his Son, born of woman, born under the law, 5 to redeem those who were under the law, so that we might receive adoption as sons.

We’ll have more to say about the fullness of time in the next post, but this remarkable passage from Galatians conveys another, equally amazing, truth:

Christ does not just show up as ransom. He actually shows up in the form, condition, limitations, and restrictions of those whom he is ransoming.

This is a little examined aspect of Hebrews 13:3, which says:

This means something more than just standing at the window wringing your hands waiting for their release. Just as Christ did, it means being found in their likeness. So not only are you showing up, but you are showing up as them, with them, like them. That was a defining characteristic of early church ransoming: Whenever a Christian was held captive, people didn’t show up to protest outside the prison, and, even more fascinatingly, they didn’t show up to bribe the prisoner’s way out.

They showed up to bribe their way in—to be present with the captive:

When the imposter Peregrinus Proteus is imprisoned because of his Christian leadership activities, every effort is made by his community to get him out of prison… When this proves impossible they descend upon the prison in droves, bribe the guards in order to spend the night with him, bring food and raise money; others come from other cities as far away as Asia, sent at common expense…to help, defend, and strengthen him. For, adds Lucian… “They show incredible speed whenever such public action is taken; for in no time they lavish their all.”

Talk about making an impact on one’s captors!

If Christ had descended, heavens parting, in the form of God, alighting on the temple mount, he would not have had much difficulty getting people to pay him heed. Likewise, with Christians imprisoned for their faith, with young girls held in brothels, when we show up in the form of rich Westerners, we’ll have no shortage of people we can ransom with our big fat wallets.

But the problem is, as Christ knew, overwhelming one’s captors (or buying them out) can’t end the cycle of captivity. It only perpetuates it. Worse, it accelerates it. Because captors’ hearts don’t soften in the presence of ransom payments and shows of force. They harden.

If, however, you show up in the actual form and likeness of those you are ransoming (and this doesn’t mean wearing a disguise–Philippians 2 doesn’t say Jesus was God wearing a human costume; it says he became man), then captors see two things:

This enables you to cry out with the most powerful cry of missionary identity, “We too are only men, human like you.” And it allows you to appeal to captors as their fellow, not their ticket to an early retirement.

Meditate on that thought and you’ll quickly see the futility of Westerners jumping on airplanes and catching flights to the nearest North Korean concentration camp: We can try our hardest, but we still won’t look like North Korean prison camp wardens. It will never be very convincing for us to say, “We are just like you.”

So put away your wallet, because money can’t end captivity. And put away your plane ticket, because you’re going to have a hard time incarnating yourself convincingly in the form of a Thai peasant outside a brothel. Instead, turn to the next post, where we learn that it takes more than presence to effect a ransom.

It also takes a plan.

The Reverend Dr. Eric Foley is CEO and Co-Founder, with his wife Dr. Hyun Sook Foley, of Voice of the Martyrs Korea, supporting the work of persecuted Christians in North Korea and around the world and spreading their discipleship practices worldwide. He is the former International Ambassador for the International Christian Association, the global fellowship of Voice of the Martyrs sister ministries. Pastor Foley is a much sought after speaker, analyst, and project consultant on the North Korean underground church, North Korean defectors, and underground church discipleship. He and Dr. Foley oversee a far-flung staff across Asia that is working to help North Koreans and Christians everywhere grow to fullness in Christ. He earned the Doctor of Management at Case Western Reserve University's Weatherhead School of Management in Cleveland, Ohio.
View all posts by Pastor Foley →
This entry was posted in Ransoming the Captive and tagged Being a Ransom, fullness of time, Ransoming the Captive, Work of Mercy. Bookmark the permalink.

5 Responses to Presence: You Can’t Be A Ransom If You Don’t Show Up In The Form Of The Captive