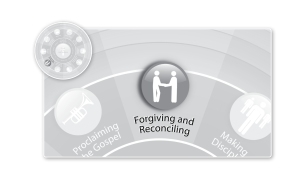 I was teaching about proclaiming the gospel to our North Korean Underground University students in class this past weekend. I asked them if they recalled the official announcement of Kim Jong Il’s ascension to power and, if so, who made the announcement, where did they hear it (e.g., radio, television, meeting), and what were the specific words that were shared?

One by one the students recalled how they first heard the message. One student remembered the announcement being made triumphantly by a famous news announcer. Another shared about a cadre bellowing out the news in a communist party meeting in his village. They recalled the messengers using words like “Dear Leader” and “Beloved Father.”

I explained how the word “gospel” was a technical term that predated Jesus and meant the announcement of the ascension of a new leader. “August Caesar is Lord!” would be a typical formulation of the gospel (or “Kim Jing Il is the Dear Leader” in North Korea), to which those who heard the gospel would be expected to respond in kind, even bowing the knee in submission. This gives us new insight into Philippians 2:9-11 (NIV), where Paul says:

9 Therefore God exalted him to the highest place
and gave him the name that is above every name,
10 that at the name of Jesus every knee should bow,
in heaven and on earth and under the earth,
11 and every tongue acknowledge that Jesus Christ is Lord,
to the glory of God the Father.

Our manner of evangelism suggests that we modern evangelical Christians understand the Jesus is Lord/Dear Leader part (I hope we understand that, anyway), but not the bending the knee.

Bending the knee is an unmistakable sign of submission, surrender, and fealty, and it is a key response to the proclamation of the gospel. Every culture has a different version of bending the knee, and no doubt every culture knows what that gesture of submission is. It reminds us that the Christian gospel is not only the announcement of a new leader but also the extension of forgiveness to those in rebellion. I like the phraseology of Dan Phillips of Biblical Christianity here, in a comment posted on Chris Brauns’ blog. Dan writes, “(A)bandon your case against God, repent, and humble yourself in genuine faith.” Preface that with Acts 17:30-31 (NIV) and you have yourself a pretty accurate and compelling presentation of the gospel:

30 In the past God overlooked such ignorance, but now he commands all people everywhere to repent. 31 For he has set a day when he will judge the world with justice by the man he has appointed. He has given proof of this to everyone by raising him from the dead.”

For years, evangelism stressed the personal vision aspect of the gospel (“God has a wonderful plan for your life”). Now, narrative and testimony are big. But labeling rebellion as rebellion and issuing a call to lay down arms–“(A)bandon your case against God, repent, and humble yourself in genuine faith”–reveals a far deeper understanding of the authority issue that’s involved anytime a gospel is proclaimed.

“They went back to the North via China after being lured by the North’s promise not to punish them for deserting their country as well as new homes in Pyongyang and new jobs,” she said. “The number of North Korean defectors who returned to the North this year is estimated to top 100.”

Sum it up and say: any gospel proclamation that announces a new reign but does not invite a new repentance doesn’t understand life in North Korea or in the Kingdom of God.

The Reverend Dr. Eric Foley is CEO and Co-Founder, with his wife Dr. Hyun Sook Foley, of Voice of the Martyrs Korea, supporting the work of persecuted Christians in North Korea and around the world and spreading their discipleship practices worldwide. He is the former International Ambassador for the International Christian Association, the global fellowship of Voice of the Martyrs sister ministries. Pastor Foley is a much sought after speaker, analyst, and project consultant on the North Korean underground church, North Korean defectors, and underground church discipleship. He and Dr. Foley oversee a far-flung staff across Asia that is working to help North Koreans and Christians everywhere grow to fullness in Christ. He earned the Doctor of Management at Case Western Reserve University's Weatherhead School of Management in Cleveland, Ohio.
View all posts by Pastor Foley →
This entry was posted in Forgiving and Reconciling and tagged Kim Jong Il, Kim Jong Un, North Korea, Philippians 2:9-11, Underground University. Bookmark the permalink.

3 Responses to Forgiveness As Evangelism