Rich Christians Are Robbing Others

Part VIII of our series on Opening Your Home 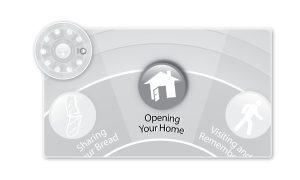 We concluded our last post by talking about why Jesus sent his disciples out empty-handed.  To receive one of Christ’s messengers is to receive not just the message, but Christ himself. And to the extent that we do so, Christ will receive us into his kingdom.

But the reverse is also true – by refusing him, we can expect to be refused in return:

10“But when you enter a town and are not welcomed, go into its streets and say, 11‘Even the dust of your town that sticks to our feet we wipe off against you. Yet be sure of this: The kingdom of God is near.’ 12I tell you, it will be more bearable on that day for Sodom than for that town.

13“Woe to you, Korazin! Woe to you, Bethsaida! For if the miracles that were performed in you had been performed in Tyre and Sidon, they would have repented long ago, sitting in sackcloth and ashes. 14But it will be more bearable for Tyre and Sidon at the judgment than for you. 15And you, Capernaum, will you be lifted up to the skies? No, you will go down to the depths.

This story is usually (and wrongly) read as being primarily about Jesus’ feelings toward wealth. It makes a whole lot more sense when we read it in this context of Jesus’ sending out messengers with nothing so that they must rely completely on those they meet for hospitality; Jesus will be able to see who is willing to receive him and who is not.

If the rich young ruler goes out with money, of course everyone will receive him! They will receive him because by his very appearance they  expect to receive some personal benefit. And that means the gospel message and the gospel messenger stop being identical.  Instead, the messenger (whether he wants to or intends to or not) now becomes a messenger of wealth and power, not of the gospel.

The biblical guest in receiving hospitality allows the host to use his or her gifts. The guest takes on a humble state allowing others to serve him or her. Being a guest is one way that we are taught humility and reminded that we need each other. The guest in the biblical world would receive the evaluation, the welcome rituals, and the sending away as a friend. The guest would show honor to the host by not overstaying their welcome – generally no more than two nights stay. Their ultimate goal was to come into a new strange place and leave as a honored righteous friend who did not disrupt the harmony of the home or community. (Ryken et al. 1998)[1]

We see these problems due to “hospitality inversion.”

Churches do this, too. They spend money to reach out to “strangers” in the community, trying to get them to come to the church. And when they come, they give gifts to the strangers.

Time and time again, in nearly every way the gospel is shared, Christians are the hosts…and those that don’t know Christ are the strangers to whom the Christians are offering hospitality.

And this is the strange challenge that we face today: Christians have too much money to need to be hosted by anyone!

The Reverend Dr. Eric Foley is CEO and Co-Founder, with his wife Dr. Hyun Sook Foley, of Voice of the Martyrs Korea, supporting the work of persecuted Christians in North Korea and around the world and spreading their discipleship practices worldwide. He is the former International Ambassador for the International Christian Association, the global fellowship of Voice of the Martyrs sister ministries. Pastor Foley is a much sought after speaker, analyst, and project consultant on the North Korean underground church, North Korean defectors, and underground church discipleship. He and Dr. Foley oversee a far-flung staff across Asia that is working to help North Koreans and Christians everywhere grow to fullness in Christ. He earned the Doctor of Management at Case Western Reserve University's Weatherhead School of Management in Cleveland, Ohio.
View all posts by Pastor Foley →
This entry was posted in Uncategorized and tagged Christianity, Hospitality, Jesus, Opening Your Home, Wealth, Whole Life Offering. Bookmark the permalink.

1 Response to Rich Christians Are Robbing Others