How to Make Disciples in Three Steps

Part II of our series on Making Disciples 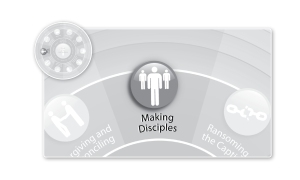 It was just before the Passover Feast.

Jesus knew that the time had come for him to leave this world and go to the Father. Having loved his own who were in the world, he now showed them the full extent of his love.

The evening meal was being served, and the devil had already prompted Judas Iscariot, son of Simon, to betray Jesus. Jesus knew that the Father had put all things under his power, and that he had come from God and was returning to God; so he got up from the meal, took off his outer clothing, and wrapped a towel around his waist. After that, he poured water into a basin and began to wash his disciples’ feet, drying them with the towel that was wrapped around him.

He came to Simon Peter, who said to him, “Lord, are you going to wash my feet?”

Jesus replied, “You do not realize now what I am doing, but later you will understand.”

Jesus answered, “Unless I wash you, you have no part with me.”

“Then, Lord,” Simon Peter replied, “not just my feet but my hands and my head as well!”

Jesus answered, “A person who has had a bath needs only to wash his feet; his whole body is clean. And you are clean, though not every one of you.” For he knew who was going to betray him, and that was why he said not every one was clean.

When he had finished washing their feet, he put on his clothes and returned to his place. “Do you understand what I have done for you?” he asked them. “You call me ‘Teacher’ and ‘Lord,’ and rightly so, for that is what I am. Now that I, your Lord and Teacher, have washed your feet, you also should wash one another’s feet. I have set you an example that you should do as I have done for you. (John 13:1–15)

Students, in turn, are focused not on their own discipleship but on mirroring the self-emptying of their teachers for the benefit of still other disciples. Paul says it like this in 1 Thessalonians 1:6–7:

You became imitators of us and of the Lord; in spite of severe suffering, you welcomed the message with the joy given by the Holy Spirit. And so you became a model to all the believers in Macedonia and Achaia.

You see, the teacher never disciples the student only but is always discipling the student on how to disciple other students. Which Paul says like this in 2 Timothy 2:2:

And the things you have heard me say in the presence of many witnesses entrust to reliable men who will also be qualified to teach others.

You can see this three step process (teacher to student to student’s student) in Jesus’ own work.

First there is his practice of the Works of Mercy, in Luke 8:1:

After this, Jesus traveled about from one town and village to another, proclaiming the good news of the kingdom of God.

Then, in Luke 9:1–2, Jesus teaches his closest disciples to practice the Works of Mercy. It says:

When Jesus had called the Twelve together, he gave them power and authority to drive out all demons and to cure diseases, and he sent them out to preach the kingdom of God and to heal the sick.

Then, in Luke 10:1, the circle widens, with the success of the Twelve as the platform for the expansion of the discipleship mission. Luke writes:

After this the Lord appointed seventy-two others and sent them two by two ahead of him to every town and place where he was about to go.

He told them, “The harvest is plentiful, but the workers are few. Ask the Lord of the harvest, therefore, to send out workers into his harvest field.”

Paul entered the synagogue and spoke boldly there for three months, arguing persuasively about the kingdom of God. But some of them became obstinate; they refused to believe and publicly maligned the Way. So Paul left them. He took the disciples with him and had discussions daily in the lecture hall of Tyrannus. This went on for two years, so that all the Jews and Greeks who lived in the province of Asia heard the word of the Lord. (Acts 19:8–10)

There is far more to study here, however, than a viral strategy of discipleship. What is seldom noted is the amazingly high cost of this philanthropy to the teacher.  But for more on that you’ll have to…you guessed it…tune into the next post.

For now, share your thoughts: is this teacher to student to student discipleship being well practiced today?  What next step do you or your church need to take to move to this model?

The Reverend Dr. Eric Foley is CEO and Co-Founder, with his wife Dr. Hyun Sook Foley, of Voice of the Martyrs Korea, supporting the work of persecuted Christians in North Korea and around the world and spreading their discipleship practices worldwide. He is the former International Ambassador for the International Christian Association, the global fellowship of Voice of the Martyrs sister ministries. Pastor Foley is a much sought after speaker, analyst, and project consultant on the North Korean underground church, North Korean defectors, and underground church discipleship. He and Dr. Foley oversee a far-flung staff across Asia that is working to help North Koreans and Christians everywhere grow to fullness in Christ. He earned the Doctor of Management at Case Western Reserve University's Weatherhead School of Management in Cleveland, Ohio.
View all posts by Pastor Foley →
This entry was posted in Uncategorized and tagged Christianity, Discipleship, Imitation, Making Disciples. Bookmark the permalink.

7 Responses to How to Make Disciples in Three Steps