Seven Ways We Can Improve Our Proclamation Of The Gospel, Part IV: Promote A Belief That Is “According To The Scriptures” 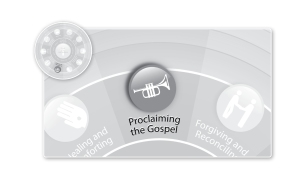 The one phrase that appears twice in Paul’s presentation of the “first things” of the gospel in 1 Corinthians 15:3-8 is “according to the Scriptures.” We might be tempted to say, “Well, the ‘first thing’ is that Jesus died for my sins. We can fill in the blank on the rest of the Scriptures in the discipleship process. Let’s get people saved first.”

It’s interesting just how differently things were done in the Scriptures and by the early church fathers and by the Reformers. J.I. Packer and Gary Parrett have a book called Grounded in the Gospel that does a great job talking about how in the good parts of church history the goal has not been to get people into the church and then teach them, but rather to get people taught and then into the church. So when people would express a desire to follow Christ, they wouldn’t begin with the sinner’s prayer and then a celebration with a free gift available at the back table afterwards to help you grow in Christ. Instead, they would first of all interview each person to make sure they were wanting to follow Christ for the right reason. Then they would train these potential followers by teaching them to believe “all that the prophets had spoken,” to quote what is said of Jesus when he talks to the disciples on the Emmaus Road in Luke 24. Then they would join the church on Easter.

And that was not a weird stage of church history that ended quickly. The Heidelberg Catechism of the Protestant Reformers took the same approach. It says in there, “What, then, must a Christian believe? All that is promised us in the gospel, a summary of which is taught us in the articles of the Apostles’ Creed” (Oden, 222). Because they took the long view of salvation rather than seeing it as a singular event, they didn’t ask, “Well, what is the one thing a person has to believe to be saved?” They asked, “What does a Christian have to know in order to believe ‘according to the Scriptures’?”

And instead of asking people to close their eyes and raise their hands or come forward or pray the sinner’s prayer after me, they required new Christians—who were baptized on Easter—to share the Apostles’ Creed or the Nicene Creed from memory. They understood that the Apostles’ Creed or the Nicene Creed or the ceremony of baptism didn’t save anybody any more than the sinner’s prayer saves anybody. That’s not why they had people learn the Creed or be baptized. People did these things because they had been taught to believe “according to the Scriptures” “all that the prophets had spoken.” That way when people asked them what the heck they meant when they said, “I believe Jesus died for my sins” or why they were being baptized, they could explain it—or, rather, proclaim it. And that’s an important part of how God uses us to make Christians.

The Scriptures and the early church fathers and the Reformers knew something else that was crucial for making new Christians. As we’ll talk about in our next point, it’s the one thing that the Scripture says that sinners do that makes the angels in heaven rejoice.

And it’s not believe.

The Reverend Dr. Eric Foley is CEO and Co-Founder, with his wife Dr. Hyun Sook Foley, of Voice of the Martyrs Korea, supporting the work of persecuted Christians in North Korea and around the world and spreading their discipleship practices worldwide. He is the former International Ambassador for the International Christian Association, the global fellowship of Voice of the Martyrs sister ministries. Pastor Foley is a much sought after speaker, analyst, and project consultant on the North Korean underground church, North Korean defectors, and underground church discipleship. He and Dr. Foley oversee a far-flung staff across Asia that is working to help North Koreans and Christians everywhere grow to fullness in Christ. He earned the Doctor of Management at Case Western Reserve University's Weatherhead School of Management in Cleveland, Ohio.
View all posts by Pastor Foley →
This entry was posted in Uncategorized and tagged Christianity, Discipleship, Evangelism, Gospel, Proclaiming the Gospel, Whole Life Offering. Bookmark the permalink.