Someone who loses their life for Christ in an instant is not the only kind of martyr.  There are countless men and women who lose their lives for Christ in little pieces over a lifetime. These men and women witness daily to the truth of Christ through their sacrificial service to others.

My wife recently met Esther, a North Korean women who fits the second definition of a Christian martyr.  Esther escaped North Korea through “selling herself,” and then began to sex-traffick other North Korean women. Even though Esther had personally experienced the pain that came from being sold to someone else, she thought this was her only hope to make money, so she agreed to work together with the broker selling NK women. Esther said,

That was the first time I was personally involved in trafficking NK women. I knew it was not the right way to live and I felt guilty, but I needed to earn money and send it back to NK. I felt like the only way I could survive was to step on the heads of others, so I began working with the broker. My only hope and thought was to earn money and go back to NK.

During that time, she met some missionaries who taught her how to pray and gave her a Bible and an MP3 player that was loaded with the gospel and NK songs, provided by VOM Korea.

I will never forget the day I received the Bible from them. I was so happy. I kept reading it and writing down the words in my notebook. As time went by, I began to understand more about Jesus and what he has done for me. I started to repent of my sin, especially the sex trafficking work I had done. 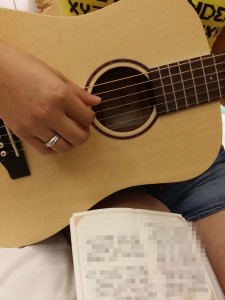 She felt in her heart that God had set her free. Esther’s life was completely changed from that point on. Esther wrote a song of praise and thanksgiving to God that described the great grace of God applied to her life, despite her sin.  Below is a brief translation of the song and a link to listen to Esther actually singing it.

“I didn’t know my Lord when I wandered.

I was stubborn, went only my way and committed all sin.

Oh my Lord, how can you forgive a sinner like me?

Can I be forgiven although I am worse than a worm?”

It wasn’t enough for Esther to experience God herself, she wanted to share her new faith with others. Esther began to search for the women that she had sold into sexual slavery.

After I accepted Jesus Christ, I searched and found five of the NK women I had sold. I wanted to ask for their forgiveness and to share the gospel with them, but I was sure they wouldn’t forgive me. To my surprise, no one hated me or had bitterness or anger toward me. They could see that something inside me had changed. They willingly accepted my request for forgiveness and came with me to meet the missionaries and learn more about the true freedom that I had found. It was a miracle.

Recently, these women were baptized together. Esther no longer desires to escape to South Korea with false hopes of money and freedom, like so many other defectors do. She has dedicated herself to staying, despite great danger and inevitable persecution, to share that which was given to her – hope.

Esther is a Christian martyr, because she is making the daily choice to share the love of Christ with others, despite the threat of danger and death.  She has the opportunity to choose comfort, but she continues to receive training from the missionaries and then takes what she has received into rural villages to minister to NK women who are victims of sex trafficking, like she was.

Pastor Timothy Dillmuth is the Discipleship Pastor of Voice of the Martyrs Korea. He oversees Underground University, a missionary training school for North Korean defectors, and does discipleship training with Christians from all over the world. Pastor Tim received a bachelor's degree from Zion Bible College and an M.Div. from Regent University. He lives with his wife, Melissia and their three children in Seoul, South Korea.
View all posts by tdillmuth →
This entry was posted in Forgiving and Reconciling, Korean Christianity, martyr, North Korea and tagged christian north korean martyr, north korean sex trafficking, Sex Trafficked, sex trafficker. Bookmark the permalink.